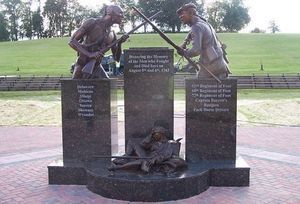 Bushy Run Battlefield preserves and interprets for citizens and visitors the site of this pivotal battle fought between British and Native Americans during the conflict known as Pontiac’s War (1763-64) and the role of this British victory in maintaining control of North America.

Colonel Henry Bouquet and a force of approximately 400 British soldiers left Carlisle in July to relieve the besieged Fort Pitt and end a series of unchecked attacks against frontier outposts. The opening of western Pennsylvania to settlement was the result of a decisive victory over the Native Americans at the Battle of Bushy Run, August 5th and 6th, 1763. Highlights of the site include the interpretive exhibit, “The March to Bushy Run” at the site’s visitor center, as well as guided and self-guided tours, special events, and educational programs.
Facebook: https://www.facebook.com/BushyRunBattlefield