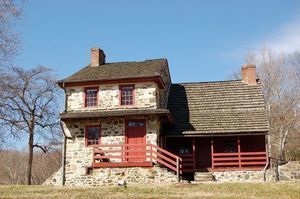 Experience the largest land battle of the American Revolution.

The Battle of Brandywine was the largest single day engagement of the American Revolution where nearly 30,000 soldiers (not including civilians, teamsters, servants, and other members of the army) squared off on a ten square mile area of roughly 35,000 acres. Today’s battlefield landscape encompasses nearly fifteen different municipalities with the main gateway of interpretation being our park. Brandywine Battlefield Park is simply a 52-acre park that was the epicenter of George Washington’s continental encampment but is often mistaken as being the entire battlefield itself.
Facebook: https://www.facebook.com/brandywinebattlefieldpark/