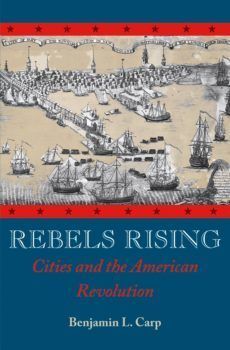 April 19: Introduction and Chapter One
May 17: Chapters Two and Three
June 21: Chapter Four through Epilogue

At its April 2021 meeting, Museum curator Kimberly McCarty will lead a discussion of Rebels Rising: Cities and the American Revolution by Benjamin L. Carp.

Click here to register. Registration is required on DCNR’s website.
Zoom meeting details will be provided upon registration.

Participants should be prepared to discuss the Introduction through Chapter One.

Then as now, the tight concentrations and diversity of people in the colonies’ largest cities offered fertile ground for political consciousness, political persuasion, and political action. Rebels Rising traces how everyday interactions in taverns, wharves, and elsewhere slowly developed into more serious political activity. Carp focuses on political mobilization in colonial America from 1740 to 1780 by examining the Boston waterfront community, New York City taverns, Newport churches and congregations, the elite households of Charleston, and the gatherings outside the Philadelphia State House and State House Yard.

“With every selection for the book club, I’m looking to share either individual stories or broader narratives that speak to the human experience at the time," says Kimberly McCarty, the park’s curator and leader of book club discussions. "I want to approach history less from a socio-political or military examination. Rebels Rising offers a good opportunity to do that because these port cities are where we find many of most affluent people in the colonies and many of the poorest. They exist side by side, yet they’re in very different worlds.”

The cities became flashpoints for protests. By focusing on some of the most pivotal events of the 18th century as they unfolded in the most dynamic places in America, Rebels Rising aims to illuminate how city dwellers joined in various forms of political participation that helped make the Revolution possible.

“We can forget that history was once current events,” McCarty says. “When these people were in middle of it, they had no idea how things were going to play out. And the answers weren’t always so obvious, just as they aren’t now.”

Book club meetings are free and open to all. Members should provide their own books.