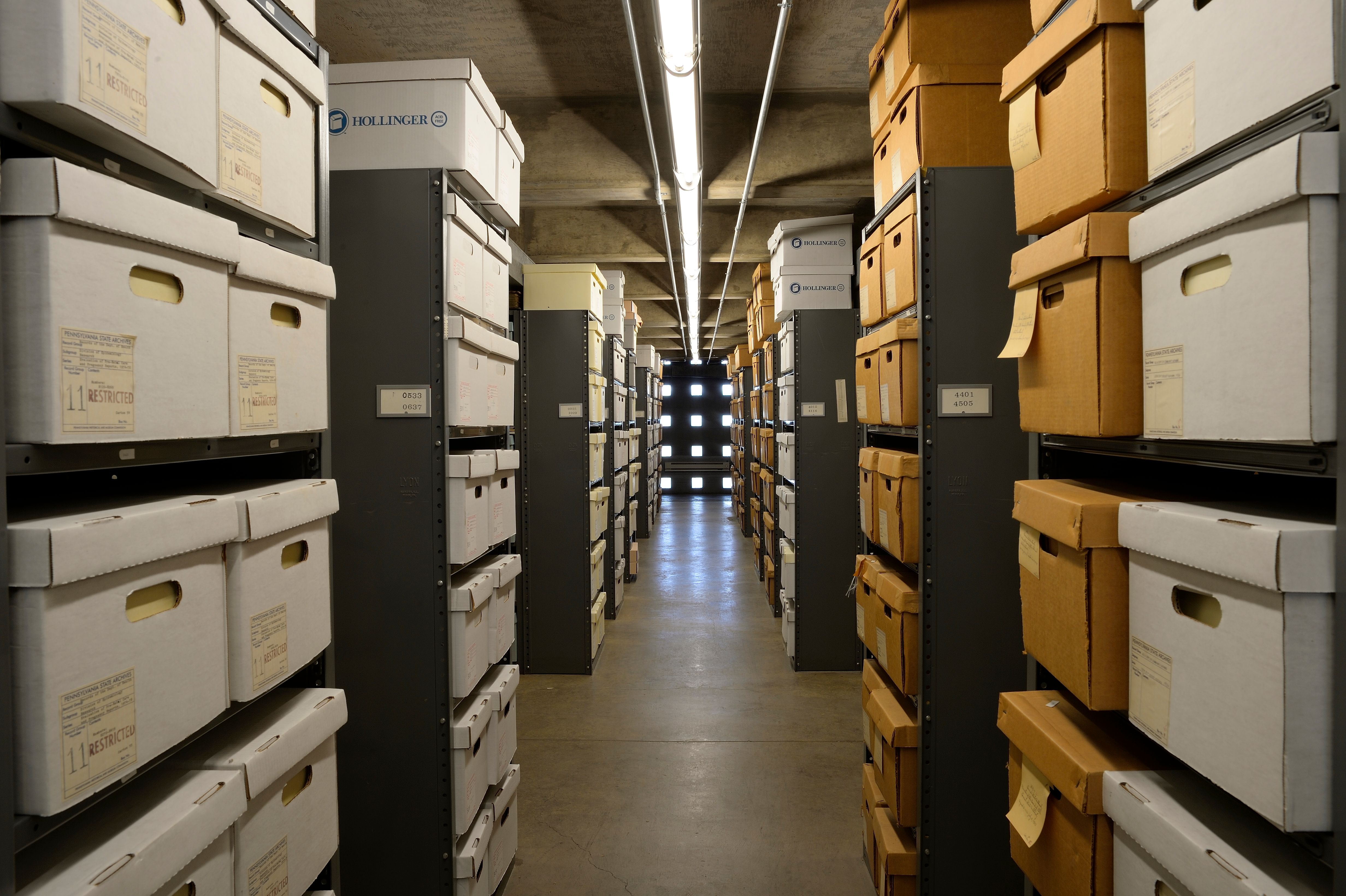 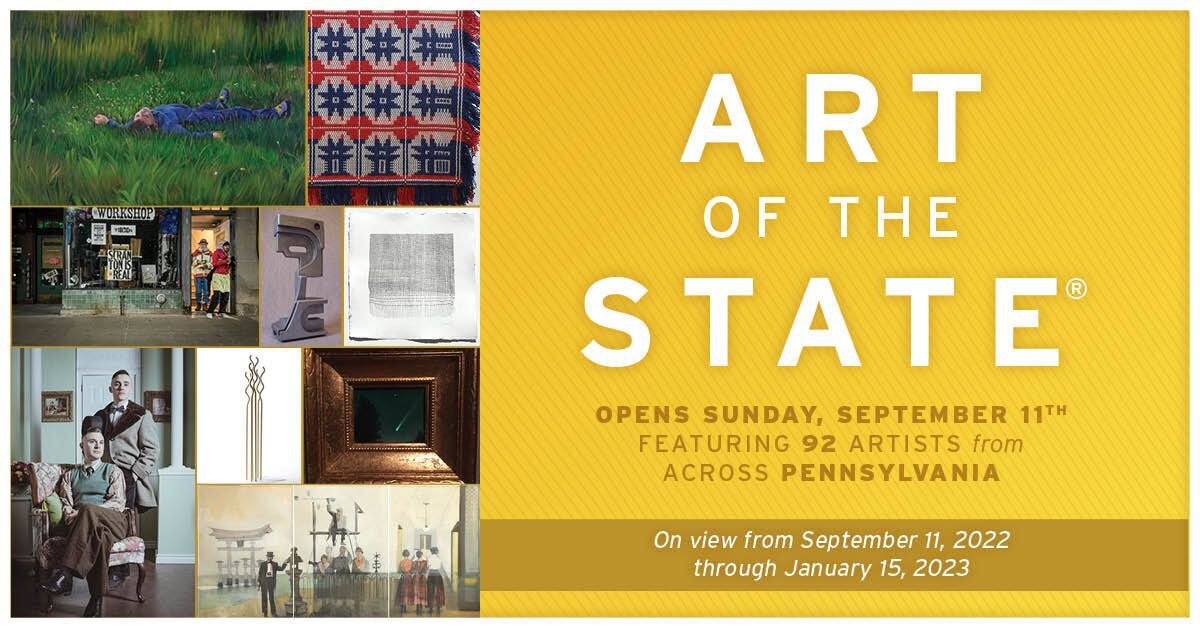 Art of the State is an annual juried exhibition that has been showcasing the work of Pennsylvania’s artists at The State Museum of Pennsylvania since 1968. The body of art that has been exhibited reflects over a half-century of creative endeavor in the Keystone State. Through the years, artists have shared their ideas and engaged viewers in the categories of painting, photography, craft, sculpture and work on paper.

Art of the State 2022 will be on view from September 11 until January 15, 2023. It will open to the public at noon on Sunday, September 11, in conjunction with Harrisburg’s Gallery Walk. Museum admission will be free on September 11.

Award winners will be posted on Facebook and Twitter. An exhibition catalogue pdf and programming announcements can be accessed on the Art of the State 2022 landing page.

The exhibit includes 92 works of art by 92 artists from 31 counties of Pennsylvania. Finalists were selected from 1,850 entries from 542 artists.

Selection jurors reviewed and scored all of the submitted works. Those with the highest ratings in each category are featured in the exhibition. The awards juror will determine the first-place, second-place and third-place winners in each of the categories.

Sheila Cuellar-Shaffer is a Colombian American artist who graduated with a degree in architectural design from the Fundación Academia de Dibujo Profesional and studied fine arts at the Instituto Departamental de Bellas Artes in Cali, Colombia. Sheila’s practice represents her interest in identity, diversity and human rights. Her work has been shown at the Carnegie Museum of Art, Susquehanna Museum of Art, Kniznick Gallery at Brandeis University, The Westmoreland Museum of American Art, Utah Museum of Contemporary Art and The State Museum of Pennsylvania. Sheila has been invited to show her work at the Pennsylvania State Capitol and the United States Department of Energy. In 2018 her design Democracy Is Power was chosen by the Amplifier Foundation curatorial team, which includes Shepard Fairey and America Ferrera, to travel around the country with #powertothepolls.

Michele Carlson is an associate professor of printmaking at the Corcoran School of the Arts & Design at George Washington University, Washington, D.C. She was born in Seoul, Korea, and raised in Seattle, Washington. She is a multidisciplinary practitioner working across the fields of art, writing, publishing and collective practice. She is formally trained as a printmaker but works across many mediums and approaches. Her visual work has been exhibited nationally at the San Francisco Arts Commission Gallery, Patricia Sweetow Gallery, Korean Cultural Center LA, Cerasoli Gallery LA and Kearny Street Workshop. She has received residencies at Vermont Studio Center, Kala Art Institute and Montalvo Center for the Arts.

Roland Graf is an Austrian media artist, designer and associate professor at the University of Michigan Stamps School of Art & Design. He crosses many disciplines to design objects, intervene in public spaces, and develop novel interactive systems that reframe the body and interactivity in the built environment. Graf’s doctoral research focused on tracing a convergence of artistic and ludic (playful) engineering approaches at the intersection of interactive art and human-computer interaction.

This year’s awards juror is Cynthia Haveson Veloric, who will select recipients in each of the categories.

Cynthia Haveson Veloric, Ph.D., is an art historian, curator, writer, lecturer and environmental advocate. She has worked in the curatorial departments of the Smithsonian American Art Museum, the Pennsylvania Academy of the Fine Arts and the Philadelphia Museum of Art. She recently combined her passion for art and environmental advocacy by pursuing a Ph.D. focused on international contemporary artists’ responses to climate change. Her dissertation is titled “Prolonged Looking and Sensing: How Ecoartists Are Shifting Consciousness Around the Climate Crisis.” In 2018 she curated the exhibition Repairing Our Earth, Diane Burko Artist/Environmental Activist and this fall she will curate the exhibition Risky Beauty: Aesthetics and Climate Change at the Main Line Art Center in Haverford, Pennsylvania.

Cash awards of $4,550 will be distributed to artists. A first prize of $500 and second prize of $300 will be awarded in each of the five categories. The William D. Davis Memorial Award for Drawing in the amount of $250 and the Art Docents’ Choice Award of $300 will also be awarded.

Art of the State is presented by The State Museum of Pennsylvania in association with the Pennsylvania Heritage Foundation.

The Pennsylvania Heritage Foundation is the nonprofit partner of the Pennsylvania Historical & Museum Commission, the state agency charged with collecting, preserving, researching and interpreting the treasures of Pennsylvania. Through private contributions, PHF supports PHMC in protecting and providing access to 24 historic sites and museums, approximately 9 million objects, and more than 250 million archival items.

The State Museum of Pennsylvania, adjacent to the State Capitol in Harrisburg, is one of 24 historic sites and museums administered by Pennsylvania Historical & Museum Commission as part of the Pennsylvania Trails of History. The State Museum offers expansive collections interpreting Pennsylvania’s fascinating heritage. With exhibits examining the dawn of geologic time, the Native American experience, the Colonial and Revolutionary eras, a pivotal Civil War battleground, and the commonwealth's vast industrial age, The State Museum demonstrates that Pennsylvania's story is America's story.

Artists selected to exhibit at Art of the State 2022 are listed by county: